Following are some of the building principles, which help in deciding the columns positions.

>Columns should preferably be located at (or) near the corners of a building, and at the intersection of beams/walls.

>Select the position of columns so as to reduce bending moments in beams.

>Edge & Corner columns to be located at minimum distance from property line so that footing can avoid eccentricity.

The projection of columns outside the wall in the room should be avoided as they not only give bad appearance but also obstruct the use of floor space, creating problems in placing furniture flush with the wall. The width of the column is required to be kept not less than 200mm to prevent the column from being slender.

The spacing of the column should be considerably reduced so that the load on column on each floor is less and the necessity of large sections for columns does not arise.

This is provided to increase moment of inertia and hence greater moment resisting capacity. It will also reduce Leff/d ratio resulting in increase in the load carrying capacity of the column.

§ Orient the column so that it can help the building to resist slenderness effect. That means, most of the columns’ length should be be perpendicular to longer side of the building. 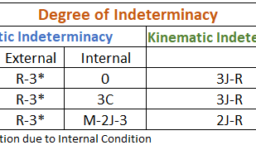